In general Traveller and Old School Space Opera ships don't have them. It messes their lines up. It makes them look too ... primitive. If you ask me the lack of heat radiators makes a ship as unbelievable as a reactionless or FTL drive. I think we'd find away around Newton and Einstein before we find a way around Old Man Entropy. Just removing heat from a machine's operation changes way more than the aforementioned drives.

FTL and grav drives get you to the action. Then you can basically forget about them in a story. But heat is a necessary inevitable by product of any energy production or work. Take Star Trek's phaser, capable of annihilating a man sized quantity of nearly anything. A quick stop at the Atomic Rockets website's Boom Table indicates that it requires 3,000,000,000 joules of power to vaporize a human being (leaving behind not even a skeleton in a space suit). 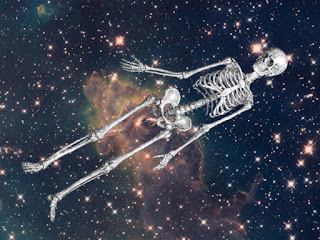 For the less science inclined (like me) that little bitty phaser put out the equivalent of 771 kg of TNT. Now assuming that ray gun is 99% efficient (which puts us firmly into the category of unobtainium, possibly with some handwaving involved as well) then you have waste heat equivalent to 8 kilograms of TNT coming off that phaser. Note that I'm leaving the question of how you get that much power in a phaser alone.

Nonetheless you can have all kinds of fusion or antimatter powered dinguses running without baking people.

Back to the ships. In the old Digest Group Publications Starship Owner's Manual some nod was made to this. The Jump drive was described as a large fusion reactor optimized to produce a lot of power quickly. Most of the fuel for jump was used as coolant to keep the ship from melting. It made more sense than a Scout ship generating the equivalent of a 450 megaton nuke going off (again I checked the Boom Table, found the energy generated by fusing a kilo of deuterium, multiplied it by 20,000 and then looked up the final result o the Boom Table anyone wants to check my math feel free.)

This would require about ten thousand times as much hydrogen as the fuel required for a jump 2. So not a lot of that hydrogen is being fused or the Heat Radiator elves are awfully busy. We're looking at a Traveller ship actually fusing a few hundreds of a percent of their jump fuel.

(Fortunately Mongoose Traveller straightened us all out by deciding the hydrogen was used to maintain a bubble in jump space keeping the ship and crew intact. No more mention of nasty heat.)

But let's say that yes indeed Traveller ships vent hydrogen prior to jump to keep the heat down. Let's further say that heat radiators are an option for the enterprising merchant or Scout.

CT/MgT
Heat radiators replace hydrogen fuel used for jump on a one for one basis. Up to 50% of a ship's jump fuel can be replaced by radiators. radiators cost 100K credits per ton. They take one turn to deploy or retract in combat and can't be operated at acceleration greater than 1g. If they are deployed on a ship accelerating greater than 1g roll a die each turn. If the die roll is less than the acceleration of the ship the radiators are destroyed.

Obviously a ship can extend its range with a radiator. Also they can reduce costs when they have to buy fuel. You don't want them on a combat vessel though if you have enough fuel to make jump at the normal cost you can without deploying them.

Space Opera
It's harder to figure out heat radiators in a Space Opera game, especially if it includes defensive shields. Any forcefield that could deal with a nuke going off nearby or a gigawatt laser could probably also be tweaked to radiate a ship's waste heat which explains why the Star Warsy/Treksy ships don't resemble windmills. If a ship wants to double dip it could extend a heat radiator beyond a forcefield giving the ship a plus to damage or movement at a corresponding minus to armor class.

May 07, 2021
Needlers have been mentioned in many science fiction stories going way back. They may be second only to blasters in space opera settings. Despite this there's only a vague (or several) notions what they are. They range from energy weapons to slugthrowers and the only consensus is that they have a very small bore size. So I consider myself to have a free run here. Boarding actions are much rarer than entertainment media would have you believe. There are good reasons for this. People boarding a ship are either extremely well prepared, armed, and skilled -or incompetent (lunatics, morons, fanatical take yer pick). If your ship is boarded by the former the best maneuver is to lay your weapons on the deck and make no sudden movements. Boarding actions by the latter are usually met with resistance because the defenders have nothing to lose. They are likewise met with booby traps, explosive decompression and many other tricks when they least expect it.  The thing most media fails to
Read more

July 29, 2021
What two words always start a fight? Roll Initiative! The initiative mechanic is an industry standard. In its basic form, you roll, they roll. High roll goes first. All things being equal you go first about half the time, they go first about half the time and there is a certain balance achieved. What does initiative mean in the real world? Actually the give and take of Initiative in game systems is way more forgiving than the real world. A truly experienced combatant could take several actions before less skilled opponents can respond. When the fur ball starts losing that initial momentum cal lead to people going to ground, being defensive and seeking to live, not strike back. Initiative can mean very little in a close up fight, with everyone shooting and striking like mad.  Some tweaks to Initiative follow. Why just use one system for a game? There are many different forms combat can take.  No Initiative. Combat is nasty. You may still roll to see who makes their hit and damage rolls
Read more