Showing posts from July, 2018
Show all

Brane and Brane and Again Brane! What Is Brane?!

So here's my crack pot "theory" of FTL travel in a nutshell. Any relationship to current physics is purely coincidental. If you see one let me know! I dig that stuff. Stars generate membranes in a parallel space (hyperspace or jump space). The branes are generated by nuclear reactions or similar energetic processes. The number of branes generated his related to the amount of energy generated. Small dim stars have one brane, a star like Sol has three. Gravitational collapse can maintain membranes for a while. Pulsars, black holes, and white dwarfs may have membranes depending on how recently they exploded/collapsed. Brown dwarfs may have branes but I made this set up complicated enough. Anyway, branes have levels of energy designating where they form around their stars. Up to four branes is stable. they form at the same distances. Other stars, objects in the system, and solar variance may distort the branes but aside from plot devices, these are minor. M-Drives tap
Post a Comment
Read more

I'm having some technical ical difficulties. That is I'm making unwise decisions. Curse you Dunning-Kruger my old foe. I'm trying to use my subsector system to focus upon individual star systems or just a few. I thought I could even map them out in a new and improved  way. Nope. Not yet anyway. The major problem I have is when you blow up a few hexes with their stars and branes you get something like this. You almost have to BE a navigator to make sense of this mess! I'm sure it is laughingly simple compared to real maps but we're talking about a roleplaying game aid here, not giving people homework. How to differentiate between systems (which have planets and all manner of crap flying around them)? How exactly to show the entry/exit points on the branes? Well first I got rid of the plus sign style markers. I went with lines radiating along the points of the hexagons. Duh. The differentiating between systems problem remains and I am afraid my answer in
Post a Comment
Read more 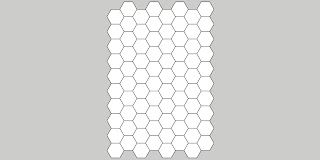 So, how do we set up a hyper Venn diagram map? One way is to draw up a grid. I suggest we honor tradition with eight by ten measurement and 80 hexes or squares. I used that in square or hex format and went with a 1 in six chance of a star in each square or hex. This gives us about 10-15 worlds which should be plenty for a game. If you need 40 or so worlds then roll up three or four such subsectors. A tip for rendering artists out there: create your grid and make it a group. That way when you  no longer need it you can delete it or hide it. I think W.I.N.G.S. works the same way. The stars shown have the minimum size 'brane for the dimmest stars.  Once you have a grid and your stars positioned you start placing their membranes (or just 'branes). A star has a number of branes according to a die roll or assignment 1-3 one brane, 4-5 two, 6 three or four. generally speaking there is no more than one star with four or more branes in a subsector. Anymore would reall
Post a Comment
Read more

July 09, 2018
I was on the Thera en route to the Asteroid Belt. The part where the Belters didn't shoot at Earthmen. Publicly I was there to examine the effects of space travel on my metabolism. People had changed in a few hundred years due to war, medicine, and their own tweaking. I was special. Privately, I worried the Big Brain. It decided to send me on a tour of the Solar System or at least the parts we could reach. Professor Ormsby spent most of the trip in our cabin fuming at being away from his lab and business. He was poor company when he was in a good mood and I avoided him and hung out with the crew. I was amazed a ship could be run with so little automation and processing power. I guess I never heard of the Apollo Program. Despite the nano plague the Space Fleet and its auxiliaries ran a pretty smart outfit. The Space Fleet had seen some criticism for its employment of computers lately. The top brass were quick to defend Fleet policy. To whit: Even with current tube technology
Post a Comment
Read more

July 06, 2018
No it is not a drive or a weapon though the title suggests some really neat drives and weapons. It deals with a modification to your 2d6 system of choice. Invert the rate at which you use fuel in space craft. So in most systems that means you burn .01 of the ship's 'mass' in fuel * p(ower plant number) per month using the jump drive. That extends the range of a ship by four, assuming a basic load of fuel. there isn't a captain living that wouldn't jump at that deal but there is more. A straight interpretation of inversion means your maneuver drive now uses .1 of the ship's mass per drive number. I assume that would be for one week under thrust. A ship that could thrust at one gee for one month would have to be 40% fuel! A ship with a thrust of six gees would need 60% fuel to thrust for a week and could only manage 1.5 gees for an entire month. Accelerating for 1 gee for a week (accelerate, flip, decelerate) will take you 900 million miles or about 8 AUs. A
Post a Comment
Read more

Fireworks for the Fourth

First happy Independence Day to my fellow Americans. Happy Wednesday to the rest of you. In the spirit of the day I am discussing fireworks. Specifically the sort emanating from the turrets of your spaceships. The sort player characters like. I never gave turrets much thought. I'll admit this and if I was pressed to describe one fast, I'd go with a block, or cylinder, or pyramid, with one to three barrels sticking out if it, built to swivel. Does this look familiar? I ask you, would this scare anyone? Something like this. It takes up 150 cm square or half a displacement ton. The other half is taken up presumably by the gunner's station, some spare missiles a/o sand canisters and maybe a couple magazines to read when things are boring. Okay, it's short hand for a weapon installation.At least it was for me. On reflection not all of a ship is shown on the deck plans. There has to be some gear not contained in the hull, sensors, engine nozzles, landing gear. Ther
Post a Comment
Read more 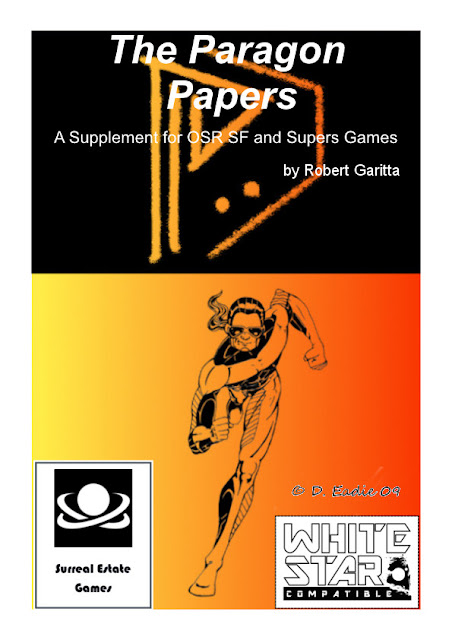 This is what I worked on after Operation Starfall (if you have read my posts on diesel punk and the Luna spacecraft and like them but didn't hear of this go check it out .) The Paragon Papers deals with  an enigmatic race of super humans in the White Star setting, able to hurdle orbital towers, faster than a missile, more powerful than a terraforming bot! When I first read of these bruisers in White Star, I wasn't sure how they fit in with the usual bunch of scruffy, reluctant heroes. Superhumans figure in a lot of space opera though. You have the Legion of Super Heroes, the Guardians of the Galaxy, and any number of strange aliens with powers beyond those of other humanoids. I've included notes on various powers they have, how to get around those powers and some devices that will negate their abilities or replicate them. There's a section on their homeworld and civilization and notes for dropping it into existing games as overtly or subtly as possible. Finally th
Post a Comment
Read more
More posts