Showing posts from February, 2020
Show all

We Has Met the Enemy Part Five 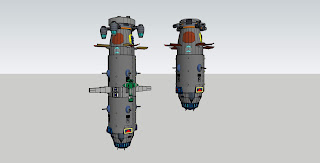 The Earth Defense force’s first attempt to build a battleship was classic Dunning-Kruiger effect. They had never built a battleship before. They had built a fine series of cruisers, typified by the Luna. The Terrans though building a battle ship was simply a matter of scaling it up. Of course several bureaus submitted designs. The design the Terrans chose initially was a monster, over four times the size of the Luna series. Engines delivered double the thrust. Four outrigger style secondary hulls to hold huge stores of ordinance for long duration battles.  Megan Detwiler had registered strong doubts about the feasibility of the battleship design, the Electorates decision making powers, and the future of the human species. Soon after a succession of disasters involving gun turrets, field emitters, airlocks and the self esteem of a number of engineers, the Electorate ordered the designers to start from scratch.  In a quandry, they turned to Admiral Buckner for advice. In the
Post a Comment
Read more
More posts