When we last left hyperspace we had discovered that

1) Stars have a number of 'membranes' determined by their size.

2) In hyperspace at least these membranes intersect and ships in this area can engage their ftl drives and move from one system to the other.

3) You have some choice of which area to exit in, if several membranes overlap.

Posted by Rob Garitta at 8:20 AM No comments:

In the beginning there was the hex grid and life was good. Hex grids are a staple of the war-games  which led to roleplaying games. They are all over the OSR and CT. In fact CT was recently criticized for mapping the galaxy as 1 parsec thick. In light of recent development, it turns out to be a little thicker!

Some people explain this as the maps being a representation of jump space with some distortion necessary in projecting it onto 2d paper or screens. Okay, fair enough. No one likes 3d maps and using trig. No matter how good they are at it. (Disclaimer: yes some of you like it. Go play Universe, don't bother calling BS on this point).

Diaspora is one (excellent) game that ignores the holy hex entirely. Worlds are in a cluster and the routes between them tagged for your use. It's similar to a node map, made popular by Winchell Chung on Atomic Rockets.

The main point of these systems is the map is symbolic, representing the hyperspace (tm) relationship between stars. So you might have situations like this:


First of all take these two star systems each full of adventure and chances to make the most wanted list. One parsec separates them in our universe.

Since we do not want to use sleeper ships or other hard SF conveyances to get between them in our setting we have a faster than light drive. On an FTL map the two systems might look like this-

Representing the stars with their 3d spatial positions is unnecessary and wasteful of paper (at 1/10,000 scale you'd need about 10 trillion sheets of paper.)

This is much more economical and concise. It shows that in ftl space, at least, the star systems have a way between them or are touching for practical purposes. The distance in real space doesn't matter to our ftl pilot. Let the torchships worry about such things.

The two star systems are touching, meaning there is a hyper space path or wormhole or whatever between them. The intersection of the two circles is a jump point. So far so good. 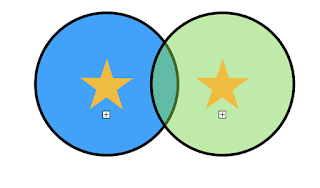 If we do this then the two systems have not one but two jump points. Only we are talking about three-dimensional objects (at the very least) so the arcs between the jump points overlap in hyper and thus we have a volume of space for our naughty players to use to slip into systems on the low down. It also makes defending a system a little harder than sticking a gigaboom a few kilometers from the jump points or covering it with a really big laser.

I’m going to add one more factor. Not all stars are equal. The more mass to the star the more jump points in general. Though this depends on other factors like the proximity of other stars and of course you have to factor in Speed of Plot etc. 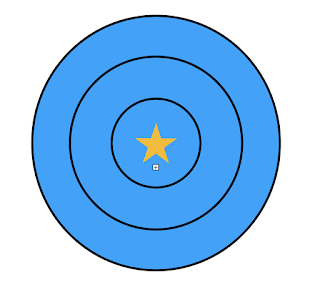 Here we have a happy little star around Sol's size. It has three ftl membranes, just 'branes. Smaller dimmer stars might have one or two. Brighter ones might have four and up. So instead of one or two jump points (which are really more like sections of a sphere in practice) you have several as the different membranes overlap and rub against each other.

More on this Friday.

Posted by Rob Garitta at 7:44 AM No comments: