Then they came out with the second edition of their rules and they changed the game. They released them as a development package. You could not only use the rules but the intellectual properties associated with the original Traveller setting and publish on One Book Shelf. You would get to write stuff set in the Spinward Marches or the Gateway Sector. They would get half of everything you made.

You could still use their OGL rules. Once you make something OGL it is OGL forever. Think of it like losing your virginity. However you lose the compatible with Traveller logo now.

I'm not interested in writing anything for the OTU (unless they ask of course). I'm firmly in the CT/rules lite, proto-Traveller camp. I do my own thing the way GDW intended before we started buying all the setting stuff. Some designers like Gypsy Knight Games had to scramble fast to re-release their products as OGL, no longer referred to as Traveller compatible (but hey, it is). I'm sure people will use the second edition rules to do OTU material. That's their call. I'm sure some people will opt for Gypsy Knight's approach (and fellows I do intend on checking out your stuff this summer, it looks excellent!). Also their call. 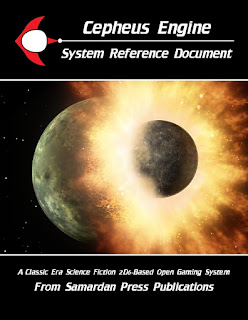 (If I need to slap some fair creative use commons boilerplate up here pls. let me know)

But Samardand Press Publications has used Mongoose's OGL to release the Cepheus Engine System Reference Document. It's basically the First Edition Mongoose rules but better in my opinion.It's well organized with a TOC that links to each subject (an index would be nice in the future). It's easy to read. I skimmed the entire 208 pages in an hour or so and feel like I could run a game with little trouble (except for shotgun group hits, I always forget that rule but, hey! I have a link to it!) The author Jason 'Flynn' Kemp did a fine job in decided what to throw out and what to keep. It's pretty concise yet it hits all the right buttons for me at least.

The engine includes a number of careers for characters that follows the classic one skill per term plus promotions formula avoiding skill bloat (it's my pet peeve). The combat system is a mix of hit by weapon type and range and damage minus armor mechanics.

Of course I immediately began writing notes for house rules and pondering how to use my posts with this rules set but I find that I can probably tweak things on either side with little effort. It feels like a good fit to run 'a game of classic space opera' using 2d6.

Cepheus Engine SRD is up on RPGNow as PWYW. I suggest you get it and pay something.

May 07, 2021
Needlers have been mentioned in many science fiction stories going way back. They may be second only to blasters in space opera settings. Despite this there's only a vague (or several) notions what they are. They range from energy weapons to slugthrowers and the only consensus is that they have a very small bore size. So I consider myself to have a free run here. Boarding actions are much rarer than entertainment media would have you believe. There are good reasons for this. People boarding a ship are either extremely well prepared, armed, and skilled -or incompetent (lunatics, morons, fanatical take yer pick). If your ship is boarded by the former the best maneuver is to lay your weapons on the deck and make no sudden movements. Boarding actions by the latter are usually met with resistance because the defenders have nothing to lose. They are likewise met with booby traps, explosive decompression and many other tricks when they least expect it.  The thing most media fails to
Read more