Showing posts from January, 2017
Show all

January 31, 2017
The Gill Men weren't the only monstrosities the Japanese found in the jungles of Brazil. The rubber industry there was largely developed and run by Japanese immigrants and one plantation manger with strong ties to his homeland reported strange unseen creatures troubling his workers. A special Kempeitai team was smuggled in, and found evidence of the creatures. They set out to trap one, being versed in their own form of shadow walking. Floor boards were arranged to squeak, coal dust spread, and thread strung to wind chimes. Nets, caltrops and darts were readied. In the end they lost several agents but brought down one of the unseen creatures. Chained and caged they began its interrogation. It called itself a Horla. After some negotiation several Horla's were recruited for the Axis cause. They devastated a special ops group in the Phillipines and killed several Australian officers and ministers before one survivor told what was going on. An Agent Unseen was sent to deal with
Post a Comment
Read more 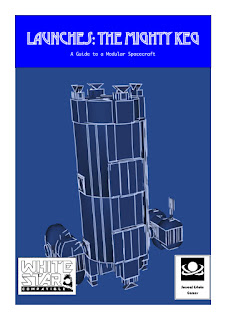 And we're live! http://www.rpgnow.com/product/204064/Launches-the-Mighty-Keg The Keg is my first offering for White Star, a little workhorse so ugly it has to be useful. The Keg is a small launch designed to haul cargo and modified to do nearly anything else. This is a twenty-one page booklet containing renderings and stats for the Keg/launch/gig/OTV and five variants. Which one will you choose? There's the beauty, it's modular! You can have them all (though not at the same time). The book also contains a battle mat for the keg and rules for making other ships modular. I hope you'll take a look, like what you see, buy a copy and play the hell out of it.
Post a Comment
Read more

Warping Through the Fall of Empire

January 29, 2017
One of the tried and true axioms of your golden Age SF and most settings is that there a single way to travel faster than light. FTL itself is fairly common in SF.  Even hard SF manages to get away with this one cheat. After all you're breaking the rules of physics as we know them once (maybe twice if you have anti-grav), there's no need to be piggish and paint modern physicists as absolute louts. My apologies to modern day physicists. I respect you guys. Your work with metallic hydrogen looks very promising and you are making great strides with that cloaking device but I want to be a little gonzo right now. In general stories and games take a conservative approach to FTL. If technological advances or levels are part of the IP higher tech levels make you go faster. That's it. There are other areas that could be improved. Let look at the Traveller jump drives. Tech levels will let you improve your jump range from one to six parsecs (which seems to be the limit but hell
Post a Comment
Read more

January 27, 2017
Sandoval looked up from her sundae as Luch barreled into the galley. “Sandoval you better … is that a chocolate sundae with butterscotch, pecans and pineapple?” he asked. His face appeared animated even under his fire pattern leather mask. “Mine. Next time you go provision shopping with me.” “That’s fine … the Captain showed up from his bargain hunting and he’s mad enough to kick holes in the hull.” “Yeah …” Sandoval had applied the first spoonful to her tongue and at the moment was in a state of rapture. She that does the food shopping gets first pick of the goodies for herself. That was crew law. “He asked me where the devil you were and … I told him you were up here stowing food. This isn’t quite what I meant though.” “Meep. He’s mad? At me?” States of rapture were apparently vulnerable to bad news. “The way your luck runs … “ Sandoval fled with neither grace nor dessert. Luch waited till the scurry of feet faded and then grabbed the sundae whistling
Post a Comment
Read more

January 25, 2017
The tunnel was a gloomy reminder. Once Zao Prime (now called Zaoprym as language drifted as sure as the continents) was ten times the present area and twenty time the population. Once before the Collapse Zaonia had a score of similar cities, now blasted and scavenged ruins. Much of Zaoprym was still abandoned outside its bright beating center but ruins remained and were there were ruins there was infrastructure. Professor Elevator knew infrastructure. He had mapped a good third of the old tunnels used for express transport ad various services and, knowing his future was as a revolutionary, did not share the information with the Order of the Flaming Sword. Now his quarrels with his brother and sister Knights seemed petty as invaders camped on their starport and waited for the strength of numbers to truly destroy them. To Professor Elevator the tunnel was a means, of escape and of insertion. He was an old hand at defying oppressors. Offworld oppressors were dumber than most local t
Post a Comment
Read more 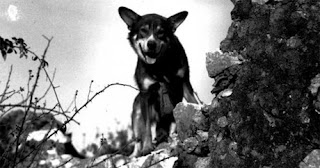 Not all the troops in the Second World War were human. As the war ground on monsters began to appear. Heroes stepped up and even man's best friends joined the fight. (Don't call me sir, I'm a sergeant!) A wonder animal can be a dog or cat (I don't discriminate here). Their bite a/o claws do 1d6-1 in close combat. Armor Class and Damage Dogs are AC 7[12]. Cats are AC 6[13]. Both animals surprise humans on a 1-3 on 1d6 if the referee choses to roll for surprise. Furthermore their keen senses allow them to avoid being surprised and warn their human companions. (Who says a wonder dog has to be a German shepherd?) Obedience Wonder animals can follow normal animals commands flawlessly -when they chose to. A dog ordered to go on ahead who spotted a minefield his human handler missed could stop instead and even stop his handler. If they have to display human level intelligence they must make a saving throw. They would need to do this, for example, to fetch k
Post a Comment
Read more
More posts