Showing posts from April, 2017
Show all

Dieselpunk Campaign In a Nutshell

April 26, 2017
I generated the following background for a dieselpunk setting. Comments in parentheses are variations I invented because I can't leave anything short and simple.  Setting One: The Atomic Gangsters! The rolls: Earth is mostly ruins with strict rationing. It is menaced by gangsters who want to rule mankind. The Earth is defended by heroes. Under technology I rolled up superconductors and insulators as well as exo-armor (human tanks) and intelligent robots. The heroes also have state of the art equipment made with ultralight alloys, and at least one member with psychic abilities. Technology does not show a high degree of automation for reasons I go into below. Earth is mostly in ruins, recovering from an atomic war in the past century. Life is hard and many items like food and water are rationed by government orders. Nutrition depends on food tablets for most of the diet (carrying supplies is not a problem, you can carry a week's rations in your jacket). Energy weapon
Post a Comment
Read more 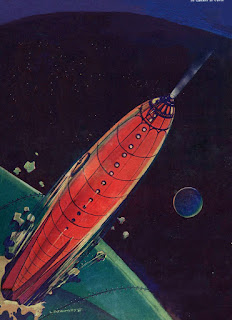 First of all I intend to return to the nuts and bolts of the Satellite soon enough. Here's a picture of her officers: Once you get over the WTF moment realize Dick Calkins was a cagey old artist. Told to introduce a slew of characters he came up with a way to make each stand out, their helmets. Note that Buck and Wilma need no such ornamentation (Wilma could probably stand out in the rain on a crowded street.) You can spend a bit of time wondering just what each helmet had by way of equipment (and why). Why does the engineer need binoculars? The electronist a breathing doohickey and the astrogator a frigging roll bar?! Why yes I have better things to do with my time. You're reading this and I might ask the same. Anyway here is a set of tables to let you or your characters customize their helmets, the better to play dieselpunk characters. Roll for location and then decoration. Then roll for special equipment. The special equipment might jibe with the de
Post a Comment
Read more

TL;DR Buck Rogers' first ship the Satellite which I have a serious bromance with. wait a couple of posts till I put up some stats if you're too pressed to read it all. In the beginning there was the Satellite: (This image and the others is probably still owned by the Dille Family  whose copyright I would never think of challenging.) Buck Rogers was happy. I was happy (much later) when I got a hardcover collection of Buck Rogers strips and they had the story of his trip to Mars. This was a spacecraft totally unlike the ones I grew up watching on television. The Enterprise was decidedly abstract. The Jupiter II was a flying saucer, an entirely different species. The rockets on the Buck Rogers and Flash Gordon serials I watched Saturdays had fins and art deco chrome and ... buzzed. This thing was an unknown fantastic beast. The rockets were in the bow for gosh sakes. It was drawn in tribute to Robert H Goddard's tractor style rockets. The concept would be used
Post a Comment
Read more

April 17, 2017
A post by Omer Joel  on Classic Traveller got me thinking about it yet again (for the the record I've also been thinking about White Star and Operation White Box). As I see it there are two major reasons for its lasting appeal. Mini Games If you look carefully CT is a series of mini games. Character generation is the first. You risk your character's survival against building an array of skills. Will you character be over the hill as age drains vital characteristics? The trading game is essential to making your mortgage payments. Doing your homework here can be a life saver. Tip: Find a world where you can buy something low next to one where you can sell it high. Get rich. Combat is fast and deadly. Do you remain undercover or advance? Do you carry ammo or smoke grenades to provide cover? Do you expend all your endurance striking powerful blows and running or let the other guys wear themselves down? The resource allocation and decision making comes up everywhere in Classic
Post a Comment
Read more

April 14, 2017
The Phrogues came to Zaonia. Zaonians knew there was intelligent and nonhuman life out there. Most of them leanred all they knew about aliens from the movie serial Ghouls of the Underworld . Despite this the Phrogue ship opened friendly relations by radio after it entered orbit. Trade began as the Zaonians had some useful metals the Phrogues wanted for fabrication and couldn't be bother to dig up or crack asteroids for. they baubles and gadgets they traded were immediately seized by the Tech Knight orders. A number of officials in the civilian government and the Order of the Flaming Sword were concerned about the Phrogue practice of buying or renting warehouse space. Nothing went in or out of the warehouses except Phrogues. To be fair the Zaonians would be suspicious of humans doing likewise. Then the Profit Rockit broke out of hyperspace and grounded. It turned out the Rockit had met the Phrogues and exchanged pleasantries via radio and in person on the ground. In fact sever
Post a Comment
Read more

April 13, 2017
Aliens Capsules Book Two went live (yesterday, somehow I missed it). Shi ... whoops yet again. The book was a lot of fun to right and hopefully it will find its niche. It includes the following beings: Beanpoles, Phrogues, and Voles If you've read my Tesla stories these guys will be familiar to you. They can make good friends and allies if you want to put up with them. they say the same thing about humans. their mindsets and environmental tolerances are close to human with some differences I encourage you to find interesting. Gtkktk Hive minds are a staple of science fiction, despite everyone having a different idea of how they work (ironic). The 'Giks' are avians who subordinate themselves to the 'flock'. Different sized flocks have different behaviors and functions. Shoot up a bunch of laborers and they will regroup as warriors. Hydroids Sentient liquid life. Waterproof and Hydroid Proof are two entirely different things. Nanites Advanced alien machi
Post a Comment
Read more

April 10, 2017
And we're live ... sort of. I just dropped the pdf of Aliens Capsules Book Two at OBS and even though it's my fourth product I'm still not vetted enough to be allowed to go on line immediately. This sucks to put it mildly. We live in an era of a massive amount of RPG products. A newbie like me is rapidly swamped by ten other people putting their products in the pipe. After ten people or so get put online your product is not longer one of the first things people see. That can lead to a rapid transit to oblivion. When I started freelancing ten years ago it was a bit easier. The ratings system went according to the number of copies you sold twenty or more -IIRC- and you at least made Copper Pick which gave your product a bit more visibility. But now it's percentage based and much harder. My strategy so far is to try to release my books on Monday morning. With the delays required for approval though they get released who knows when. Last time was Wednesday noon. M
Post a Comment
Read more

All Creatures Bitey and Small

April 08, 2017
A recent run to Zaonia resulted in a tet crab female coming onboard and laying a clutch of eggs. She died at the pincers and palps of her voracious children since she’d already eaten their father. At that point the young went into hiding and began maturing or being eaten by their siblings. Luch, the steward’s cat, Rockit was in charge of vermin control. Being a young cat he assumed the Profit Rockit was his ship. It was named after him after all. Since the humans had their uses he let them remain. At the moment the situation was developing he entered the lower hold, which was nearly empty. That was why he spotted the tet crab so easily. The other reason was she was an arrogant young crab that considered the ship her property and ate whoever disputed it. Rockit attempted a pouncing maneuver, but came up short when four pincers began snapping in his face. The two began circling, Rockit hissing, the crab whistling. The commotion brought Luna, the ship’s dog. Luna was an anoma
Post a Comment
Read more 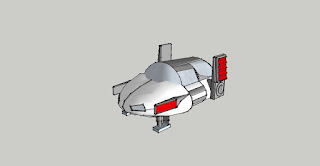 So we have lifters that can go into orbit. This is a classic trope of Traveller. In fact the idea of personal orbital transport is way older than that. A character with a flying car capable of reaching low orbit appears in Waldo (Robert A. Heinlein, 1942). So an air/raft or hopper or flitter going to orbit is something we've lived with in literature for a long time. Classic Traveller had the open-topped air/raft and going to orbit required the passengers to ear spacesuits (the living, organic ones anyway). For my part, I think an orbital hop with no preventative measures is a little dicey for the following reasons: 1) Armor - we always hear about the relatively thick hulls of starships in Traveller and other classic games. One reason for those thick hulls is micro-meteors. A tiny chip of Godknowswhut recently gouged a window on the International Space Station. Most source material doesn't give a flying car anywhere near the armor to stop, say a rifle shot and such debris is
Post a Comment
Read more

Those Scruffy Pilots and Their Rusty Freighters

April 03, 2017
I love the White Star game. It's fast, it's fun and you need to make a lot of stuff up for your background (these are all qualities I also have.) What if you wanted to make up an economic system or just guidelines for how much a credit can buy, how much a ship's overhead is and all that. I gave it a whirl inspired by Atomic Rockets of course! If you're really making up a Cepheus Engine or 2d6 game out of whole cloth you can find a lot of this applicable. Basically I started with the medium freighter and made it analogous to a modern cargo jet. A medium freighter runs 15,000 cr. A cargo jet costs 100 million. Thus 1 credit is @ $6500 in terms of buying in this regard at least. Don't think too hard on it. I assumed a cargo run takes about two weeks. There's a two week holdover at the port. That makes 26 cargo runs a year possible. The two weeks is just an average. It may be more or less on some runs. I assumed a ship will last twenty years. Ship lo
Post a Comment
Read more
More posts