Showing posts from February, 2014
Show all

A Good Cliche Is Never Inappropriate 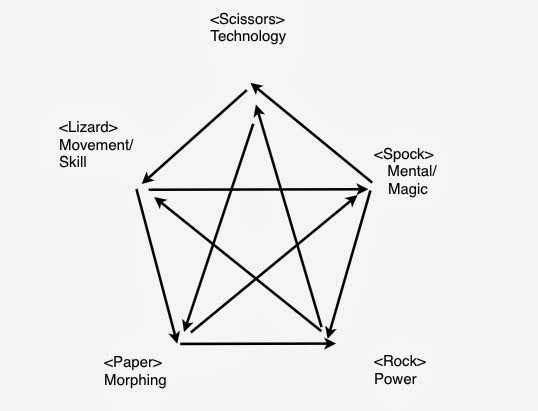 Some people may accuse me of over thinking things. This is especially the case with games and what the dog is trying to tell me (hey, Yorkies are deep thinkers.) While I was thinking about Risus Supers I came up with a quick way to tell what sort of activities your super hero would suck at. I sort of regulate what is appropriate and inappropriate. Below is a quick diagram breaking superpowers into five types (the Big Bang Theory fans have already realized I lifted this from Rock, Paper, Scissors, Lizard. Spock.) I suppose they could be used for almost any Risus game with a little tweaking so go ahead. Basically there are five areas of a conflict can fall into. Every cliche is inappropriate to two types of conflict and has two cliches that are inappropriate to its kind of conflict.   In game terms a Single Action Conflict would have its difficulty increased by five, 10 or more. An combat could have the cliche deemed inappropriate, halved or be handled using the brevet dice m
Post a Comment
Read more

February 23, 2014
A principle of Risus is that the winner of a conflict can dictate the consequences to the loser. Hopefully players will use this rule to promote dramatic play possibilities and move the story forward. But sometimes they just want to kill off that villain the whole session hinges on, the one you spent a week of lunch hours tweaking. In that case you might want to offer the player some sort of compensation for letting your plot go unharmed. In this case assuming the player or referee comes up with a plausible reason (or at least something for a good story) that character is awarded a temporary Lucky Shot die (once you use it, it's gone unlike the Lucky Shots you bought when you created the character. So the character pockets his bootie and the villain escapes mysteriously or at least manages to get a lucky shot in and run for it. This can work both ways. A villain who captures a hero would be well advised to shoot them dead right off the bat. If they give the hero a chance to esc
Post a Comment
Read more

February 20, 2014
In addition to d6 and Mongoose Traveller I like the Risus system. The strength and appeal of the system is its adherence to the KISS principle. The new edition of Risus, for example pared the rules from 8 pages down to 4! Not that I mind reading anything S. Jon Ross writes. He is awesome. But it's great he writes well and get me into the game. The only minor problem I have is that he really doesn't do super hero settings. So you have to do your own and tweak the rules to fit it. That's what I'm doing today so Risus fans brace yourselves. If you aren't a fan yet ... give it a try. It's only 4 pages. I'll wait. The Basics Fighting super-humans is hard for normals! A single ordinary person (even a policeman, soldier or thug) has no appropriate cliches to engage a super-human. Ducking the guard or trashing him is a single action conflict and often a cinch. A squad of ordinary humans is handled under When Somebody can't Participate. They get two brevet dic
1 comment
Read more

February 05, 2014
I've been trying to get to the next level in rp and wondering how to go about it. Understand I'm talking about my actual play, not a game character. I've met some lovely, lovely players on a text based MUSH. I plan to run some games for them if they wish on Hangouts or Roll 20. But after a hiatus of several years I'm looking at how I play and wondering what I can do to make other people want to play with me. Characters have it easy. The way they improve is usually spelled out in the game books. I have to make it up as I go along. Obviously I need more experience i.e. doing more scenes with other players. I also need to learn some more MUSH coding. But beyond that I'm adjusting my style of play in a refereeless game as follows: 1) when I pitch a scene to someone I try to see it from their POV. How can I create a scene where their character is a valued part? This is something I used to do as a GM without a second thought. As a player among equals I have to remem
Post a Comment
Read more
More posts