Showing posts from October, 2017
Show all

Care and Feeding of Space Fleet Crew in the Diesel Age

Let's talk about uniforms. Uniforms have several functions beyond keeping your backside from sticking to the furniture (though that may be the most important!) Uniforms allow you to recognize a member of the service. Uniforms provide some measure of protection. Uniforms provide pockets. Space Fleet uniforms are made of nonflammable material. The basic uniform onboard ship consists of a light blue coverall with green piping down the legs and boots (either high boots or ankle height). Sleeveless and legless green overalls are often worn over this. The Space Fleet is fairly easy going regarding uniforms onboard ships and in transit. Small personal touches are allowed. In addition while the uniforms are designated male or fem crew are welcome to wear whichever version is more comfortable to them. The basic uniform consists of a blue coverall and boots. The boots have ankle and shin reinforcements. The protection is not only good for  using a lifter belt, it is helpful in
Post a Comment
Read more

The Smallest Spacecraft on Luna

Spacers know the very nature of their job requires exposure to hostile if not deadly environments. Exposure can be planned or unplanned. Unplanned exposure can be very bad indeed: a hull breach, gas leak, fire and other emergency situations requiring damage control. Planned exposure includes mining, repairs in space and exploration. Damage control teams use combination filter and compressor masks. The Damcon version of these masks includes a five minute air tank and a socket for an air hose. These are usually left off the masks used for exploration. The mask is actually a hood or straps onto the wearer's helmet providing full face coverage. Individual preferences are accommodated because you want your damcon people happy with their gear. Popular media makes people think damage control and combat involves people donning space suits en mass. That is seldom done. A compartment struck by weapons fire or a micrometeor either has a leak or a breach. A breach means the compartment loo
Post a Comment
Read more

October 23, 2017
Any merchant trader will tell you pirates are lazy @#$%! The exact translation of @#$% will vary by world but you get the idea. The media presentations of pirates as charging in with lasers blasting are ... exaggerations to say the least. Lasers don't blast any more than a searchlight in vacuum for one thing. For another most merchants will stop resisting after a few well placed and low power shots tag them, or a missile or two is launched. A professional pirate simply demonstrates the means and will to end you and then the ball is in your court. The problem all pirates must face is ... economics! A pirate ship is a warship, whether converted or out of the dock. Warships have a number of features merchant ships do not, large magazines, oversized thrusters, barracks for troops, a large reserve of propellant and fuel... Merchants don't have these things because they eat up room that goes for cargo. Cargo, speculation and freighting is the merchant's life blood. The me
Post a Comment
Read more

October 23, 2017
Our new man carried a Thompson and spoke fluent English with an accent I couldn't place. Luxembourg? Swiss? Belgique. Fitzy said he was from the Orkneys. His dog tags read Frank Fitzroy. Our first Dark Mission we were meeting Maquis who had vital intelligence and vampires ... freaking vampires. I didn't know what else to call them. Only they weren't like Bela Lugosi. They had big bald heads and long talons and they could make you freeze while they opened you up like a fish. I know because one of them nearly did it to me. But before its talons could fall on me a sword came out of nowhere and took its head clean off. It was Fitzy swinging a blade with one hand and blasting away with his Tommy gun with the other. He dropped the Thompson when he blew through the clip and went to town on them swinging the sword two handed. One of them ripped his tunic open to show a white shirt with a red cross across his shirt. The fear left me. Suddenly these were just deformed monstrosi
Post a Comment
Read more

October 20, 2017
Professor Ormsby was kept pretty busy on Luna schmoozing with other eggheads about sea monkey based hardware, tardigrade group mind training and the proper mixture of a Cosmopolitan in no particular order. I made a comment about that and he closed the discussion with his usual fallback: I obviously knew nothing of scientific congregations. I liked Luna. The People were taller than the runts back on Earth. They had long bodies, short legs, and flat butts from the low gee they were raised in but At least I didn't have to slouch to talk to someone eye to eye. Of course they also had to run around in the shower to get wet and I could choke one of the brawnier specimens with one hand. But they used some kind of 'sonic' shower to save water recycling costs. I had no idea how sound waves got you clean. It made my teeth buzz but it worked. Maisy smelled nice. That's all I knew. We hooked up pretty quick after the professor and I blew into Lunapolis. She was designated my
Post a Comment
Read more

The Care and Feeding of Mad Scientists 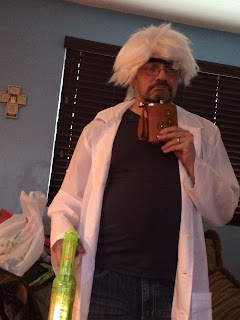 Mad scientists have a long and honored tradition in comics pulps and more mainstream literature. Look how long Lex Luthor has bedeviled Superman. Down many times but never out should be his motto. As far back as the 1800's you had H.G. Wells introduce Griffith, the invisible man and Dr. Moreau, the very unconventional mad surgeon (that takes two more years of mad medical school and mad internship, you know). They keep turning up to the extent of Cartoon Network producing Rick and Morty where the mad scientist is the focus of the show (hoorah)! First let's discuss what is meant by mad. It can mean insane (though it isn't a very sensitive term). It can mean anger or rage. It can also mean 'very' or extreme as in an extreme or unusually intense scientist. Me, partial to  mad scientists? Why do you ask? In terms of extreme the mad scientist is apt to push the boundaries of science to their limits and then beyond, unconcerned with such paltry matters as OSHA, l
Post a Comment
Read more

October 02, 2017
Personal Transcript Technical Officer GCS Tesla. GAIA: So … hockey sticks are not meant to knock bad automata over with and cause them to glitch? Lieutenant: Nah. I told you this. Humans found very effective ways to prevent any further AI uprisings. Will you let me get some sleep? GAIA: Explain? Please? Lt.: Fine but then straight off to defragging with you. No one ever explained this to you? Toff was going to I guess, may he rest in peace. GAIA: Seconded. Please explain. Lt.: Well for one thing we made you as smart as us, no smarter. Oh you can crunch tons of data. But innovations, initiative. You’re better than most humans but not better than the smartest humans. GAIA: Agreed. Is that all? Lt.: Are you making puppy dog eyes at me? GAIA: … I … it is a technique I am practicing to maximize human attention in my discourses.  Lt.: I suggest you emulate Ms. Riasi. She’s a pro. GAIA: //She is cat girrrrrl.// Of course and noted. Explain. Please!
Post a Comment
Read more
More posts