April 19, 2017
TL;DR Buck Rogers' first ship the Satellite which I have a serious bromance with. wait a couple of posts till I put up some stats if you're too pressed to read it all.

In the beginning there was the Satellite:

(This image and the others is probably still owned by the Dille Family
whose copyright I would never think of challenging.)

Buck Rogers was happy. I was happy (much later) when I got a hardcover collection of Buck Rogers strips and they had the story of his trip to Mars.

This was a spacecraft totally unlike the ones I grew up watching on television. The Enterprise was decidedly abstract. The Jupiter II was a flying saucer, an entirely different species. The rockets on the Buck Rogers and Flash Gordon serials I watched Saturdays had fins and art deco chrome and ... buzzed.

This thing was an unknown fantastic beast. The rockets were in the bow for gosh sakes. It was drawn in tribute to Robert H Goddard's tractor style rockets. The concept would be used nearly a hundred years after Goddard's work in the movie Avatar's Valkyrie style starships.

The internal drawings were for familiarization purposes of course. Don't take the four meter tall rocket gunners too seriously. Or the Hobbit sized engineers required to work the machine shops and labs in the stern.

Starting from the bottom (stern) the Satellite had an armored ram that could severely inconvenience less sturdy ships at close range. The one time they used the ram on a Martian sphere the collision knocked everyone silly. Presumably the Martian ship survived as it was nowhere to be found when the Earth men came around, but in no shape to continue the conflict as it didn't finish the Satellite off.

At the tip of the stern was a large (~1m,) dome lighter in color than the rest of the hull, where the plans indicated there was a release valve for their 'liquid ultronium' ballast. That seems odd unless the dome was somehow permeable to the ultronium and hey why not a bunch of microfine holes set in an armored ram? Ultron, the other miracle material in Armageddon 2419 was incredibly hard as well as naturally transparent so the dome might be tinted ultron with a huge light behind it to do overtime as a release valve, ram, and landing light.

Above the ram were four hatches. One at least opened into an airlock. Another could fire magnetic grapples.. The others might be lockers for tools and such. It seemed like a lot of 'locks on one deck.

Above the hatches there was a row of dark squares. Solar batteries? Sensors? Not sure yet.

A couple of meters above the main airlocks there portholes. they seem to match up with the navigation deck or what would be called the command center these days. It looked like the portholes could open up like a porthole on an ocean going ship and I'm not at all happy about a row of the things on the deck with your command crew. However, they were probably made of ultron and as strong or stronger then steel. The portholes opened inward and air pressure would hold them shut to prevent them from being opened in space.

Above the navigation/observation deck, we have four huge 'rocket guns'. The Earthmen made heavy use of recoilless or rocket rounds in their weapons (rayguns were a few years away for them, though the Han nation was using disintegrator beams.) If you went by A: 2419, these rounds had a variety of warheads, most likely including atomics. It is also stated several times the North American's rocket weaponry outranges ray weapons. In Traveller terms they look like four single turrets (I miscounted in an earlier post). You could say they are the equivalent of triple missile turrets using a single launch tube and a quick fire launcher.

The rocket guns likely used a magnetic or pneumatic system to kick the shells out of the ship, igniting their engines some distance away for safety. They might have fired dumb shells too.

Alongside the turrets is an 'emergency ladder' running most of the length of the ship. It's more for what we call EVA today. Oddly enough the ladder doesn't reach to the bow. But when you have a jump belt that isn't a huge problem.

Onward and upward there is a ring of portholes above the gun turrets and It seems they are a circular observation deck running around the main cargo holds. 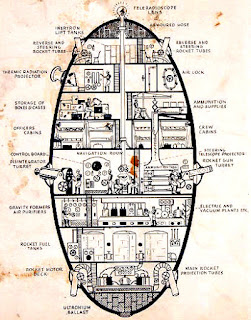 (Also Dille Family Property. I'm not trespassing so much as pointing from the fence.)

Near the top/bow and below the rocket engines is a thermionic ray projector. It's a huge stubby barrel and seem to be a fixed mount unlike the weapons on the gunnery deck. Maybe 'thermionic ray' is future talk for a heat radiator! I'm using that slim thread of supposition to make the huge panels heat radiators. Don't leave atmosphere without one. There is also an airlock! Which explains this: 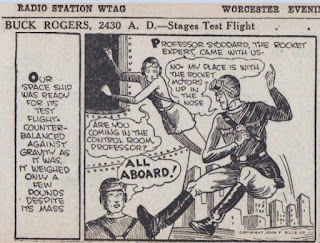 (Okay, know what? If this is ticking off any lawyers I will be glad to replace these with links. In the meanwhile if you like this check out Roland Anderson's archives. Lots of beautifully rendered comics.)

Wilma is boarding the Satellite using one of the square hatches. Professor Stoddard, the engineer, seems to be jumping past her (heck of a jump though you wouldn't think that judging my his form.) An airlock would also be handy for loading parts and spares, let you pounce on Martian Tiger Men from really high up, and just be a good safety feature.

The bow of the Satellite is the rocket hood, containing descent and tractor rockets. That would keep people routinely boarding the ship away from the engines which are presumably hot in at least one sense.

Then again we have this: 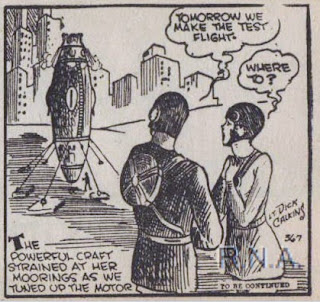 Obviously Dick Calkins was heavily influenced by zeppelin and dirigible operations when he was working on the Satellite. A static test of the engines on low power is a good idea. Standing under the ship while the engines are firing? Not such a good idea to me. Then again Larry Niven and Robert A. Heinlein traumatized me with tales of how dangerous their engines were. More on this later. It's still a great picture (even if the silhouette is waaaaay too big).

Maybe that's Bob Byron. Bob Byron was a tough customer. Coming soon some interior views and more like this 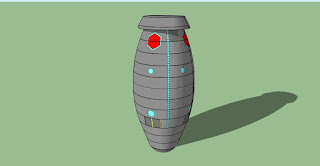 (This one is MINE. Back off Lawyers!)